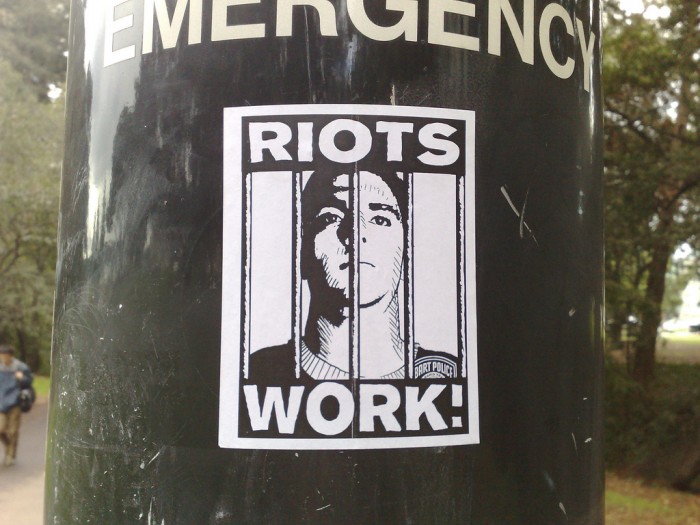 –It is good example of activist writing.–Very important article for reading and for continuation of dialogue about protests and do they work?


In the past several months since the streets of the so-called United States of America were set alight by riots after the murder of black teenager Mike Brown by a white police officer, an increasing number of people seem to be asking the question: do riots work?

In answering, people tend to look at the historical connection between violent unrest and the government granting concessions afterwards. While this connection is certainly very real, it misses some key aspects and drastically reduces the scope of what we might consider a so-called “victory.” The federal investigation into the Ferguson Police Department would likely never had occurred if not for the sustained unrest throughout 2014. The rioting that took place after a BART police officer murdered Oscar Grant is often credited with the officer’s arrest and subsequent conviction (however lenient.) Fear of further rioting in Birmingham is said to have prompted the federal government to pass the Civil Rights Act of 1964. And if the federal investigation, the conviction of a police officer, or the passing of legislation is what is sought after, then surely, the riots work. But we want much more than that; we desire the downfall of the capitalist-white-supremacist-patriarchal social order.

This thought process has emerged in reaction to the obscuring of violent (for lack of a better word) conflict in favor of a white-washed, pacifist history of struggle. Oftentimes liberals and others wishing to preserve social peace suggest that all struggles that were successful primarily utilized non-violent tactics. It may be tempting to accept the above framework as a response, but we do so at our own peril.

A more important question might ask why rioting is suddenly caught in this recuperative scheme. Before, the state was satisfied with repression coupled with the spreading of “outside agitator” narratives to isolate potential rioters. But since the Ferguson uprisings, the tactic has become more generalized. As a decreasing amount of people are put off by riots, and thus the strategy of erasing its potential must be shifted.

When the success of rioting is framed in terms of concessions won, it replaces the revolutionary nature of the riot with the agenda of reform. It becomes simply one of many tools in the activist’s toolkit to achieve “social change.” Want to pressure your elected officials? Riot. Revolutionaries seem to be misled by this newfound appreciation for formerly-condemned tactics and are excited for a culture that accepts and even supports not-so-civil disobedience. But when we agree to this framework, we only sacrifice this growing potential.

After periods of unrest, self-styled radicals often claim that violent tactics were the only way to grab media attention, to bring an issue to light, or the only way to make those in power listen. And this is not untrue. Those in power certainly only listen when they are being threatened, and rioting offers people a way to threaten power. But when a political solution is offered—the federal investigation, the indictment, etc.—it is not a reward for rising up, it is an attempt at de-escalation, at counter-insurgency. This is key to understanding the connection between uprisings and concessions.

In exchange for restoring social peace, the state offers superficial solutions to the underlying problems that caused people to riot in the first place. Rioters return to their homes, feeling accomplished while nothing fundamentally changes. Heralding these concessions as sincere accomplishments not only obscures their recuperative effect, but also mistakes them for genuinely progressive solutions. No amount of “bad apple” cops locked up could possibly end the oppression found in the very existence of police and prisons. No amount of legislation can replace the need to completely dismantle the state structure.

For riots to truly “work,” we must abandon the framework of the activist, and recognize the concessions of the state as what they truly are: attempts at recuperation. Each riot offers us the opportunity to find each other and act collectively, appropriating everything around us that was built for the functioning of capitalism for our own needs, or else do away with it. It is only through sustaining moments of rebellion that we might catch a glimpse of sincere success.

Written almost a year ago, “Do Riots Work? Exploring New Frontiers of Recuperation” attempted to clarify a misconception of the so-called ‘post-Ferguson era.’ It addressed the tendency to frame riots as a means to achieve reforms as a response to pacifism, and claimed that doing so actually forecloses revolutionary possibilities. Since then, the task of further elaboration has proven itself more crucial than expected.

Referring specifically to rioting missed the opportunity to address a related development. In the past year or so, rioting has not spread nearly as much as ‘disciplined militancy.’ Christmas 2015 in particular was marked with several actions by organizations such as Black Seed and various Black Lives Matter chapters that spectacularly shut down highways, airports, bridges, and more. Activists carry out bigger and more impressive disruptions that mirror the uprisings following the acquittal of George Zimmerman or the murder of Mike Brown, but remain within the traditional political framework. While some see this as a “refinement” or evolution of the latter spontaneous actions, it could more accurately be described as the capturing of what was previously uncontrollable. Instead of agitated crowds chucking proverbial wrenches into the gears of the nearest capitalist infrastructure, activists carefully craft a spectacular event for mass consumption. The latter follows the activist logic of consciousness-raising through media-centric protest, perhaps inherently so. These actions interrupt the functioning of society only as required to draw attention to their grievance or cause.

The nature of demands has been more thoroughly explored elsewhere, but put simply: any engagement with those in power to address our problems simultaneously reinforces their power. I refer to this as politics. To take action that seeks no concessions or even recognition from power, that advances our own position in a material way, is sometimes called destitution.

A typical anarchist reaction to the actions carried out by these activists usually involves suggesting less controlled, more confrontational actions instead—but as discussed in the original piece, this doesn’t truly get to the heart of the matter. More destructive actions can still be captured by politics if politics itself is not confronted. However, the future depicted in “Do Riots Work?” has not yet come to pass: rioting and it’s associated tactics (property destruction, street fighting, looting) have not yet entered the mainstream tactical array of activists in the United States.

While anarchists in the United States are familiar with a left that represents the pacifist middle ground between themselves and the far right, it appears more likely that it’s function will evolve to capturing tactical escalations within the political terrain. Instead of, or even complimentary to, fighting against escalations of militancy, it will attempt to make those actions legible to power, to explain them politically.

More and more are becoming frustrated with the plainly ineffective rallies and parades, it would be a mistake for the left to forfeit its own legitimacy so easily by abstaining from militancy which has become increasingly popular. Conceding a moderate amount of damage is a small price for preserving the social control of politics.

I therefore propose the following hypothesis: it will be worth more in the long run to push the analytical framework of destitution rather than trying to escalate from within a political logic.

If we set our sights on the social order in it’s entirety, the tactical maturity will follow. There is no reason to remain devoted to pacifist tactics when one stops appealing to the state or the ‘masses.’

Of course, the importance of desitution is about more than tactics, it is about making insurrections irreversible. How else could order be restored, without the legitimacy of politics? Undermining this legitimacy is the only way to prevent a return to normality. Satisfying demands—or, all too often, simply the promise to satisfy the demands in the future—can easily halt revolt in it’s tracks.

When we find ourselves in these situations—in riots, in blockades, in uprisings—we don’t simply get to choose the character that it takes. For this reason, we must find ways to intervene in these political movements to push the tensions at anti-political fault lines within these events. Politicians of all sorts must be resisted and their programs sabotaged, laying bare their attempts to preserve life as we know it—while sowing the seeds of destitution.

We also need to operate outside of them to maximize our potential. There is no denying the material consequences of attacks or blockades regardless of their political nature. A shut down highway is a shut down highway, a burnt police station is a burnt police station. When activists carry out their theatrical actions, it could be an opportune moment to paralyze another node of the metropolis. Not because our struggle is the same, but to spread the fires of revolt.

Whilst the primary focus of both essays dealt primarily with recuperation of confrontational tactics from the left, there are more reasons to dis-identify tactics from motivations.

As should be clear, shared tactics have little relation to a shared project—and often enough the opposite is the case. The re-emergent far-right in Europe (and more often in the U.S. as well) has found itself capable of breaking windows and torching refugee housing, while various authoritarian factions have joined popular uprisings from Kiev to Cairo. Many have observed that this decade’s revolts appear to belong to a single trajectory, but the conclusion that we are all partisans of insurrection together is a false one—even if some refuse to admit it.

This thinking is best represented by the recent video A Resolution, which is a short propaganda film that calls people to action, but shies away from putting forth any position. Simply anyone fighting “for freedom” or “for the Earth” should join up together and get organized. The omission of any discernible ideological grounding is further complicated by the inclusion of footage from movements that took a heavily right-wing character.

We must be absolutely clear: we are not simply advocating for certain tactics, we intend to see the end of domination.