If bad boys should tempt you. – There is an amor intellectualis [Latin: abstract love] for the kitchen staff, the temptation for those who work theoretically or artistically, to relax the intellectual [geistigen] claim on oneself, to lower one’s niveau, to follow all manner of platitudes in the matter [Sache] and expression, which one had rejected as an alert appraiser. Since no categories, not even that of cultivation [Bildung: education], can be proscribed to intellectuals anymore, and a thousand demands of hustle and bustle endanger the concentration, the effort of producing something with a measure of integrity is so great, that scarcely anyone is still capable of it. The pressure of conformity, which burdens everyone who produces something, furthers lowers their demands on themselves. The center of intellectual [geistigen] self-discipline as such is understood to be disintegrating. 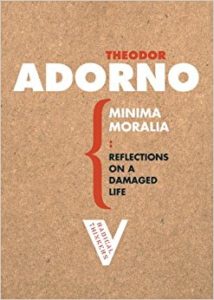 The taboos which comprised the intellectual [geistigen] stature of a human being, often sedimented experiences and unarticulated recognitions, direct themselves continuously against one’s own impulses, which one learned to condemn, which however are so strong, that only an unquestioning and unquestionable juridics [Instanz] can halt them. What applies to the life of the instinctual drives, applies no less to the life of the mind: the painter and composer, who forbid themselves the use of this or that color combination or chord contrast as kitschy, the author who finds that a linguistic configuration gets on their nerves as banal or pedantic, react so forcefully because there are layers within them which are drawn by such. The rejection of the hegemonic overgrowth of culture presumes that one has participated enough in the latter to feel it in one’s fingertips, as it were, simultaneously drawing from this participation the forces to dismiss it. These forces, which make their appearance as such in individual resistance, are for that reason by no means of a merely individual sort. The intellectual conscience, in which they are integrated, has a social moment so much as the moral superego. It crystallizes in the conception [Vorstellung] of the right society and its citizens. If this conception is set aside – and who could still blindly subscribe to it – then the intellectual compulsion towards the bottom loses its inhibitions, and all the junk which the barbaric culture has left behind in the individuated [Individuum] comes into view: half-education, laxness, cloddish trustfulness, shoddiness. Mostly it is rationalized as humanity, as the wish to make oneself understandable to other human beings, as cosmopolitan responsibility. But the sacrifice of intellectual self-discipline is borne far too easily, to really believe that it is indeed one. This is drastically evident when observing intellectuals whose material situation has changed: as soon as they have convinced themselves even the slightest bit that they must earn a living by writing and nothing else, they send the same junk into the world, down to the last nuances, which in their lusher times they once denounced with the utmost ferocity. Entirely like formerly wealthy emigres, who can finally be as greedy in foreign lands as they always wanted to be at home, so do those who are impoverished in Spirit [Geiste] march enthusiastically into the hell, which is their heaven.