Authoritarian populism is everywhere. Even in a beach read co-authored by Bill Clinton and James Patterson. Don’t take the book too seriously, it’s just a popular political thriller that you bought at a supermarket? Just enjoy it for what it is and have fun with it? I will admit I am sympathetic to these sorts of objections. Still, this is clearly not an 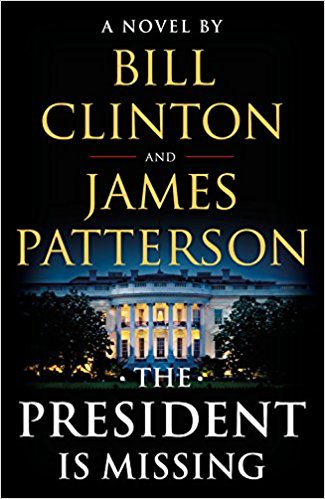 apolitical political thriller (could there even be such a thing?). In a publicly displayed interview, the authors explain that one motivation informing the book is the desire to show how important the position of the president is, and to lend support to sustaining American democracy. There is no overt partisan political message here. The president’s ideals come across as very moderate. Yet he (and the book as a whole) is not by any means neutral in character, values and tastes. The President is Missing fetishizes strength and patriotism, and disparages intellectualism and high culture. Thus it dovetails with authoritarian populist social currents, despite its surface-level moderate politics.

Here are several examples from the book:

I stare at the door after Speaker Rhodes leaves. I’m not sure what I was expecting. Old-fashioned patriotism? A sense of responsibility, maybe? A bit of trust in the president? Dream on. (58)

I know this is the only option that will spare the country untold misery and allow me to do my duty to preserve, protect, and defend it. (94)

“But if I’m not satisfied,” I continue, “I’ll do whatever is necessary to you, to your girlfriend, to anyone else you care about in this world, to protect my country. There’s nothing I can’t do. There’s nothing I won’t do.” (137)

I have three hundred million people to protect. So my only question is how I can use his emotions to my advantage. (167)

I can’t let go of my obligations for even one second. If I do, then my men just gave their lives in vain. (181)

Throughout the book there are an abundance of compliments and positive descriptions having to do with being strong, fearless, and so on. The following are examples of the strength-focus in the novel:

He’s not exactly a laugh a minute, but he’s as straight and strong as they come, and he runs my security detail as efficiently as a military operation. (62)

Carolyn never shows weakness. It’s not her way. And it’s a comfort right now, because she’s the only one I can count on. (84)

“He called you ‘a born leader who kept his head and found a way.’ He was right. Jonathan Lincoln Duncan – and I’m not saying this because I love you – there is no one I’d rather have in charge right now” […] I am in charge. Time to quit whining and suck it up. (365)

High culture makes little appearance in the book. But where it comes up, it is either associated with villains or cast as inferior to ‘regular American’ culture.

The professional assassin is nick-named “Bach,” and is obsessed with classical music. When she enters the story she is courting high-end luggage – a Bottega Veneta Trolley, which currently run from $3500 to $4650. She wears Gucci boots, and rather pricey sunglasses as well from Ferragamo, which are nonprescription and would most likely cost between $300 and $400.

The terrorist villain indulges his male entourage with a slew of prostitutes. While prostitution is of course in of itself not a staple of “high culture,” the idea of men being serviced by a collection of hired women – especially granted to them by someone else who has greater power – is a common enough theatrical trope signifying gifts from patriarchal royalty.

Then there is baseball. The president used to play baseball. He also attends a baseball game (which is perhaps the most culturally indulgent moment of the novel, which is not saying much):

You can shelve all those microbrews: at a ball game, there is no finer beverage than an ice-cold Bud. And no food ever tasted so good as a hot dog with mustard at a ball game, not even my mama’s rib tips with vinegar sauce […] I’d kick back and remember those days […] eating Big Macs and dipping Copenhagen. (128)

And last but not least:

I’ve always seen the goodness in Alex…He’s the first to tell you he wasn’t book smart, but he was a hell of a left tackle and got a football scholarship to Iowa State, where he studied criminal justice and dreamed of joining the Secret Service so he could do in life what he did on the gridiron – protect the blind side of his client. (93)

We’re in the middle of an estate owned by a friend of mine, a venture capitalist who, by his own admission, doesn’t know a damned thing about what he calls “computer-technical stuff” but recognized a winner when he smelled it (232-233)

[T]hey look as much like students cramming for finals as they do cybersecurity experts trying to save the world […] “Is it possible,” I say, “that you people are too damned smart? […] Is it possible that you have so much knowledge, and you’re up against something so sophisticated, that you haven’t considered a simple solution? That you can’t see the forest for the trees?” (370)

I have the tiniest fraction of their knowledge, but the more I interact with them, the more I think that might be an advantage. They are way too engulfed in the trees to see the forest. (385)

Of course the book is more than just these themes, and there are surely scattered instances that would contradict them. Likewise, there are other political messages and resonances subtly and not-subtly littered throughout (criticisms of tribalism, lack of trust in government, racial violence by police against African Americans, and so on). Obviously, the social and political totality of this thing is layered and complex (or you might call it moderate and self-contradictory). And I make no claim to be able to peer into Clinton and Patterson’s combined brain to know the full extent of their values and intentions with the book. What I can say is that, among whatever else, much of it colludes with some of the recent authoritarian populist trends in America: fetishizing strength and patriotism, and casting formal knowledge and high culture in less than favorable light.

2 thoughts on “The President is Missing (book review)”