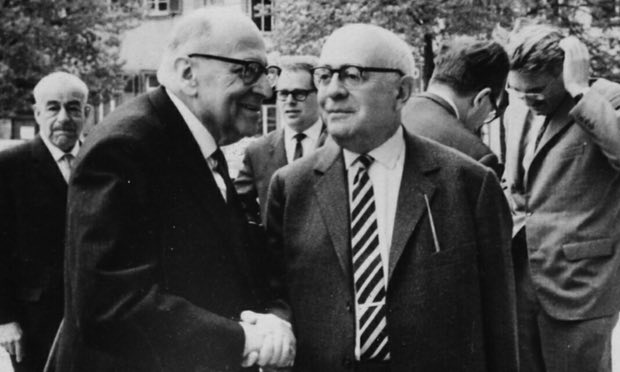 By Lisa Appignanesi, reposted from The Guardian.

A fractious Europe, a failing currency, a challenged economy, populist parties on the rise, a divided left, migration from the east, an atmosphere of fear combined with social and sexual liberalism. The parallels between Britain today and Germany in the 1920s may well make this a compelling moment to revisit those postwar German thinkers who gathered in what was known as the Frankfurt school for social research – something akin to a Marxist thinktank, though one whose policy papers and brilliant books fed future generations as much or more than their own.

Max Horkheimer, Theodor Adorno, Herbert Marcuse and Erich Fromm, together with the close, but formally unattached Walter Benjamin, and from the 1970s Jürgen Habermas, were the core constellation. With the rise to power of the Nazis, the school’s Frankfurt headquarters had to be abandoned. Double persecution, as Marxists and Jews, began in 1933. Adorno, a brilliant musician as well as theorist, went to Oxford first to study with Gilbert Ryle. The school itself moved briefly to Switzerland and then the US, settling in what novelist Thomas Mann called “German California”. Despite their unchanged stance on capitalism, some of them were recruited for wartime intelligence work in the battle against the Nazi regime…