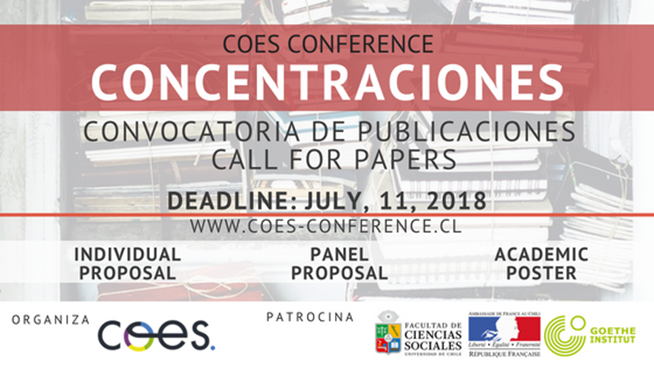 The following is copied from an email message sent by Emmanuelle Barozet.

The Centre for Social Conflict and Cohesion Studies (COES) extends an invitation to participate in an interdisciplinary reflection on the concentration of power, wealth, status and information, among other sources of domination present in society. We are interested in understanding the temporal, political, social and spatial effects on the development of social conflict and cohesion.

It could be by individual proposal, panel proposal or academic poster.

On this occasion, the concentration of power will be analysed from different perspectives, according to the following thematic lines:

COES CONFERENCE It will be held the 14th, 15th and 16th of November 2018 at the Faculty of Social Sciences of the Universidad de Chile in Santiago.

on, University of New York

ABOUT COES
The Centre for Social Conflict and Cohesion Studies (COES) develops collaborative research on topics related to social conflict and cohesion in Chile, through a multidisciplinary team from the social sciences and humanities. COES centres its academic and dissemination activities on the analysis of the multiple manifestations of social conflict in Chile, its causes as well as its cultural and historical context.